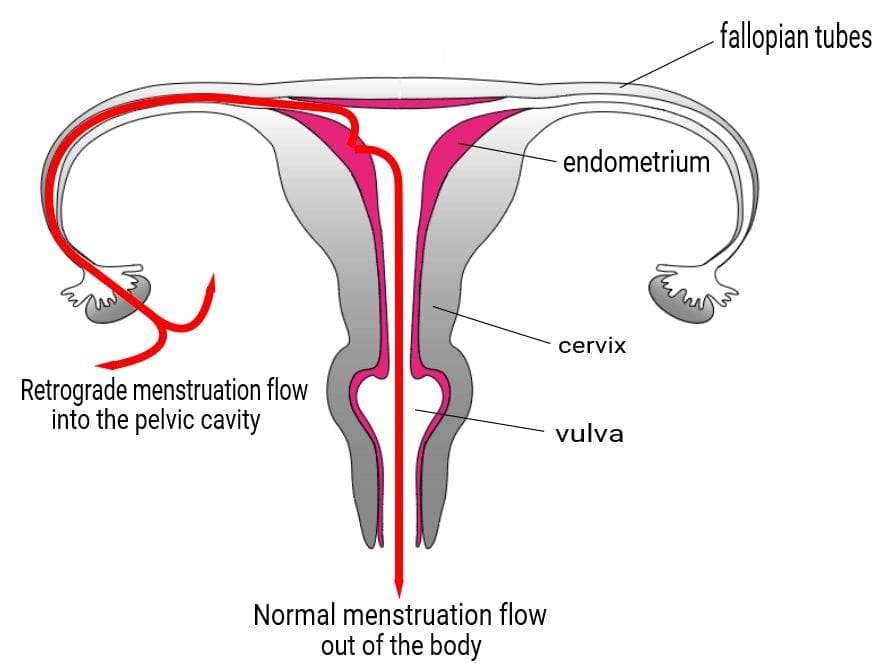 This is where Retrograde Menstruation comes in.

The classical definition of Retrograde menstruation refers to a woman’s menstrual blood flowing back into her body during her period.

But before explaining the medical facts, we should know a little bit about Dr. John A Sampson, an Albany gynecologist who became fascinated with endometriosis after encountering it in many of his patients. Despite the passage of nearly a century, ‘retrograde menstruation’ remains the most persistent – yet flawed – theory of disease origin, leading to continued confusion about, poor health literacy on, and failed treatments for endometriosis.

‘Sampson’s Theory’ dates back to the early 1920s and is based on the extensive works of Dr.Sampson. There are many hypotheses examining the origins of endometriosis, but perhaps the oldest is Sampson’s theory of retrograde menstruation and his theory proposes that the retrograde flow of menstrual blood is linked to the development of endometriosis.

His theory proposes that when retrograde menstruation occurs, the menstrual debris carries sloughed-off tissue from the endometrium, which is the lining of the uterus that sheds monthly. These endometrial cells will then be carried backward through the fallopian tubes and to the ovaries and surrounding pelvic cavity, where they can implant and cause the development of endometriosis.If the menstrual flow does not exit as it should, the menstrual blood may leak back into the body through the natural openings in the fallopian tubes.

The debris can then implant in areas outside of the uterus in the pelvis and creates an abnormal growth of cells: endometriosis with inflammation. These lesions will then grow with further menstrual cycles and unlike the endometrium that naturally leaves the body, there is no way for the implants to exit the body. The inflammation and endometriosis grows and continues to spread. This is why endometriosis can be thought as menstrual periods that are literally stuck inside of a woman’s body.

While the thought of menstruation flowing backward may seem daunting, it is, in fact normal for most women to have some form backward flow. Because tissue and fluid can drain harmlessly through the body’s natural mechanisms, you may not even feel any symptoms of this.

Sampson’s theory of retrograde menstruation states that During menstruation, pieces of endometrium arrive in the abdominal cavity through the Fallopian tubes, adhere to the peritoneal lining and develop into endometriotic lesions. For over 8 decades now people have wrongly believed that endometriosis consists of the endometrial lining of the uterus. It has low and varying levels of hormone receptors compared to native endometrial tissue and behaves differently than native endometrium. The most plausible theory with what knowledge we have today is Mülleriosis, the current best-fit model of the origin of endometriosis, refers to a developmental defect in the differentiation or migration of any cellular component of the müllerian duct system during embryonic development.

Many doctors, while certainly supporting that retrograde menstruation does exist, question the role it plays in the development of endometriosis.

b) https://www.endofound.org/:Endometriosis foundation of America.

Can you be more than a woman living with types of PCOS?

Menopause: What to Expect when you reach this phase.