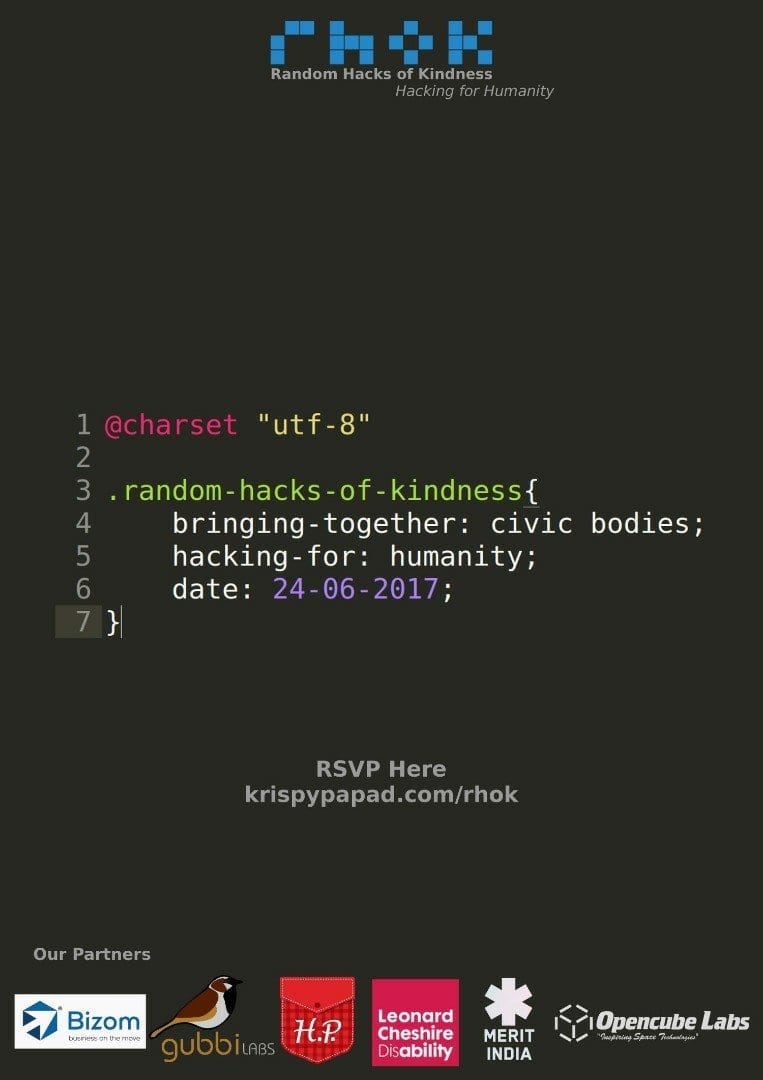 “Not many people are working on affordable accessibility technology. Our group in Bangalore has a group of people who specifically look at accessibility and they have been working on it for years. Since they get involved frequently, it gives the group very good insight into the sector. Accessibility is the area we are able to articulate better problem statements so we stick to it because if there is something that we could come out with then we should retain it.”– Chinmayi S.K, Global Community Coordinator, Random Hacks of Kindness.

Random Hacks of Kindness (RHoK) claims to be the longest running social hackathon in the world. Accessibility has been a focal theme for Random Hacks of Kindness, Bangalore in the past few editions of their hackathon. The 2016 edition of the hackathon dealt primarily with disability: to make different spaces accessible to persons with disabilities. The problem statements put forth in the 2016 edition included accessible bus stops , public toilets and travel apps accessible for persons with different kind of disabilities. Apart from these, assistive technology mechanism, water management, wheelchair accessibility were also put forth as problems at the beginning of Day 1 of the 2016 edition. Day 2 focused on solving challenges of different accessibility issues. This included the challenges of accessible toilets, accessible bus stands for visually impaired, facial/speech recognition for quadriplegic and workplace solution assessment app for persons with disabilities.

This year’s Bangalore edition happening on June 24 and 25, 2017 is looking to hack to solve five different problems statements pitched by different partner organisations. The press release states the following as the themes for the 2017 edition: disability, sustainability and disaster management which has as its problem statement:

Earlier, RHoK editions in India would adopt the global hackathon themes. However, in the last few years, the local teams in each city have been deciding on the main themes for their city’s hackathons, based on the issues most prominent in their city.

“After the teams come up with a list of top themes, we reach out to each year’s partners to provide their specific problem statements. After this, we see if these are problems with technical viability. Is there something already existing that could solve this problem? If the answer is no then we go ahead and take that problem up to refine it to be presented to participants in a hackathon,” explains Chinmayi S.K.

” The one thing is we do not have too much funding but we try to make it as accessible but clearly don’t go all the way. We want to do that more. We know what it takes it to make an event accessible. We hope to make the event more accessible.” – Chinmay S.K.

The previous editions of Random Hacks of Kindness were for many civic issues like: gender based violence, the floods in Chennai, and the differently abled. This includes the bachchao app for women’s safety and talking Keyboard, a talking typing device for training the visually impaired to build their computer skills. Since the idea is to hack to solve a social issue, no prize money is usually offered to the winning hack. However, RHoK may help the winning idea raise seed funding to take the idea forward. Ideas that have raised seed funding include Bachao, a safety app for women and Accessible bus stops. Apart from that, RHoK also follows up with the developers of other solutions to see their progress and support them where may be required.

“The talking keyboard was actually tested with visually impaired candidates who are taking computer training. And they gave us feedback,” says Chinmayi SK.

So far, the Indian editions have been supported by funding from organisations including NASSCOM 10,000 startups, US Consulate Kolkata, Twitter, HP and Yahoo. This year’s list of partners for the event include Mobisys Technologies, Gubbi Labs, Hidden Pockets, Cheshire Homes, World Merit India and Opencube Labs.

Born at the first Crisis Bar Camp that happened in Washington DC in 2009 to produce open source solutions, Random Hacks of Kindness is now in its seventh edition. With a focus on creating solutions for societal challenges by connecting technologists and different organisations, the global community is now under Geeks Without Bounds with an active presence in Africa, Asia, Australia and North America.

RHoK presently is organized once or twice every year in five Indian cities including Guwahati, Ranchi, and Delhi. The hackathon may be introduced in Nasik or Nagpur this year.

“Anyone can participate. You only need to be interested in hacking to find a solution for a civic issue,” says Poornima Kannan, Team RHOK. “I don’t have a technology background but I participated in the Singpore edition of Random Hacks of Kindness.”

Disclaimer: Hidden Pockets is a media partner for Random Hacks of Kindness, Bangalore