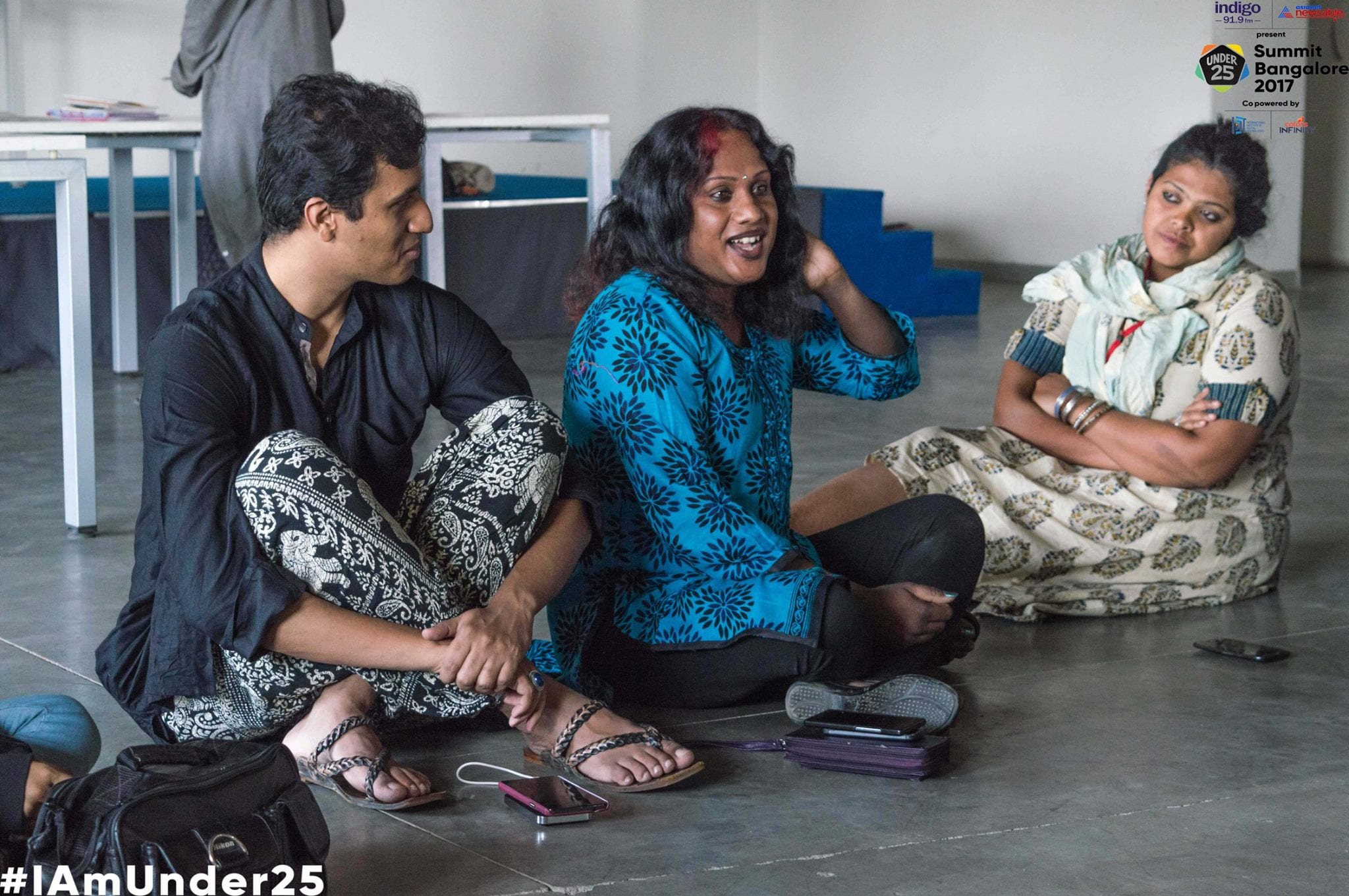 School mates – Look at Alex! He walks like a lady. Is that Drag?

Me – **crying** I don’t understand why my friends tease me. It hurts Amma.

Amma – Don’t worry! You grow soon and everything will change.

Nothing has changed. I’m still the same Alex who ‘walks like a woman’. I am proud of it now. All I wanted was people to be sensitive towards the person who I was. All the hurt, the teasing and bullying made me the strong person I am today.

An opportunity was given to me by Poornima Sukumar of Aravani Art Project to do a gender sensitisation workshop along with Shanthi Sonu, a transgender and RJ of Radio Active CR 90.4 MHz. It was for a group of girls and boys at the Under 25 Summit. I was thrilled to be a part of it. When I had started to perform as Mayamma, I knew that change would have to start from the grassroots. I knew that I will have to educate the future generation about the difference between a drag queen and a transgender. When I had asked the participants at the workshop if they knew who a drag queen was, they were clueless. It was evident that the workshop was much needed. What does a drag queen do? What’s her purpose? Is there someone known as a drag king?

I told them that Drag Queen is a person, usually male, who dresses as a woman and acts with exaggerated femininity and takes up feminine gender roles. That’s not the same with transgender. Transgender is a person whose sense of identity and gender does not correspond with their birth sex. That’s exactly what Shanthi said. She shared her struggles that she faced in life and how she got a job as a RJ. Shanthi even did a brilliant exercise to explain gender equality. She picked a guy with long hair and girl who was wearing shirt and jeans.

She looked at the guy and asked him, “Who told you that you are a guy? Even I have long hair and so do you. So how can you tell?”

She asked the same question to the girl, “You are wearing a shirt and a pair of jeans. So then how do you identify yourself as a girl?”

This exercise made the participants realize the sensitivity required towards people with the different kinds of people in this world, especially sexual minorities. It isn’t talked about or even taught about in schools or colleges. So a change can be made through such workshops. As a child, I dreamt of being an entertainer. I didn’t know how to go about it neither did anyone give me any guidance about it. On the other hand, I was dealing with bullying and teasing of ‘walking like a woman’. I was overwhelmed. My soul took it as a challenge to prove bullies and eve teasers wrong. No words were going to bring me down.

It takes a lot of courage and strength to own yourself, no matter what, the society thinks about you. If you can withstand the pressures of patriarchy and stand true to yourself, that’s all it matters. I have lived on this earth for 28 years and I still look forward to what life has to offer or throw at me. I believe in challenges and that’s what excites me now. Conducting the workshop along with Poornima and Shanthi excited me because we were looking at the society and challenging it about its so called gender norms.

I had grown tired of listening to people’s perceptions on how people should live their lives and what identity they should portray in the society. I had a dream of talking to school children and college going kids about gender equality and individuality. I can see it slowly coming true. After doing the workshop, the kids understood about gender fluidity and they were game to cross-dress and shatter the boundaries of gender conforms imposed by the society. Now that’s what I wanted to see!

Author Profile:
He is  a performer, famously known as Maya, the drag queen. He focuses on bringing about issues related to individualism, feminism and gender equality under the spotlight. Apart from that, he loves to entertain people in his spare time.