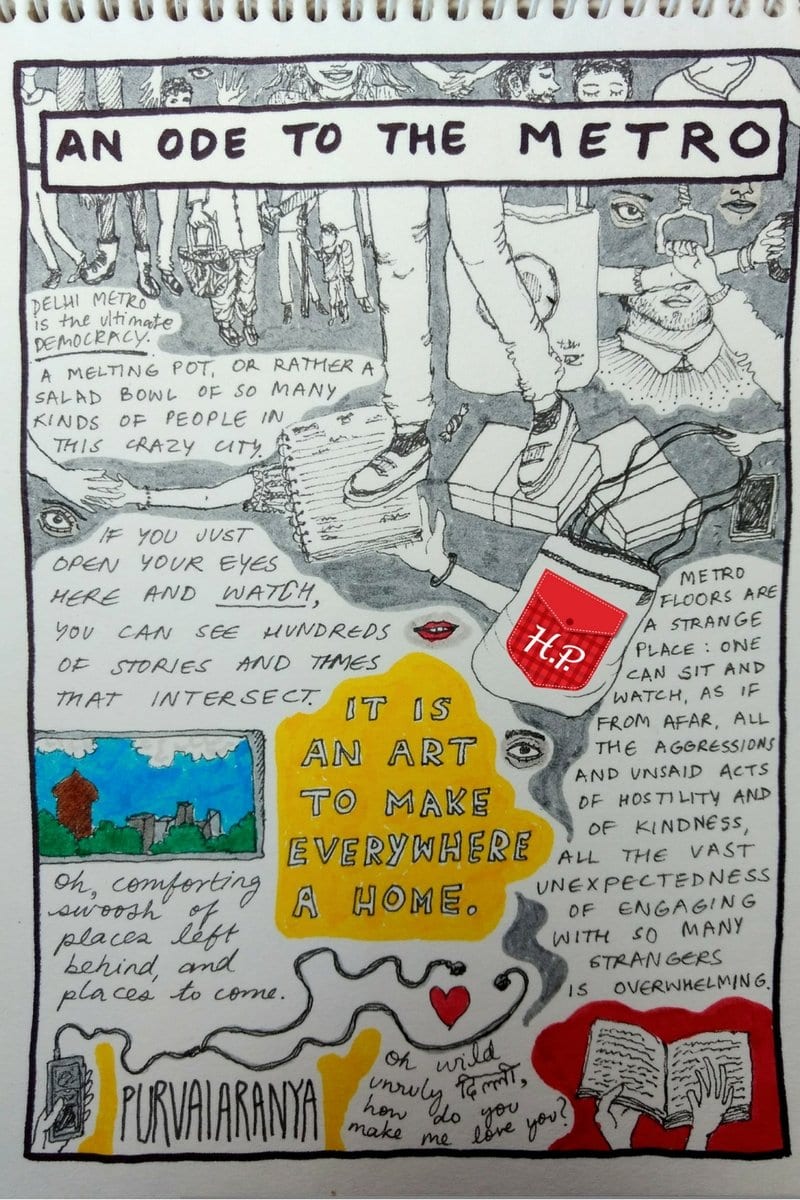 The summer I was in Europe with my mother, I don’t think I missed anything about home or college or the wild cities of India. I was entirely immersed in the newness of the experience, in the cobbled streets and vivid skies of strange cities. There was only one nagging voice in my head, the familiar and hilarious lilt of it: Vishwa Vidyayala, it said. Doors will open. It was like a song that wouldn’t leave. Mind the gap. The metro lady had made a home in my head. When did I fall in love with Dilli so fiercely, when did I begin to miss it?

When I was younger, I hated cities and the idea of cities. I was a child of forests and solitary mountain roads. Delhi of the smoke and concrete was a nightmare to me. Once my parents and I drove down to Delhi from Chandigarh, and got lost right at the border — in my memory, no matter what turns we took, we ended up at the dusty outskirts of MG Road, under half-built flyovers and a darkening sky. In my mind, that experience was a painfully accurate metaphor for Delhi.

At some point after coming to a college on the outskirts of Delhi, I changed my mind. These things always seem to happen in flashes, as though it takes a single step to move out of a threshold into blinding light. I hated Delhi consistently, hated it even from the safety of my dorm room while others explored it, hated it even whilst being in awe of it the first time I went for a gig in Hauz Khas Village and got drunk in a blue dress. Cities seemed to stand for everything that I was afraid of, everything I couldn’t be and didn’t want: glass buildings, capitalism, parties, threatening strangers. Then one day I went to the Sunday morning book market at Dariaganj and changed my mind, in a flash. Or perhaps that is just how I remember it in retrospect.

My memory is clearest when it comes to doorways, thresholds: I cannot forget walking out the doors of that sheltered metro station into the bright light and chaos of Dilli, a vast and infinite corner of the old city. We bargained with a rickshaw-walla and set off, careening down a narrow street. I was afraid to blink and miss out on a single second — this seemed like the whole world in a street, more than I had ever seen or experienced or imagined in my life — the people, the crazy roadside shops, the baffling assortment of things on sale, the beautiful windows balanced against ruined buildings, the advertisements and posters fading away against all the charm and madness of old Dilli, the cows, the carts, the noise, the tiny streets that snaked out in every direction and seemed to lead nowhere and everywhere all at once. Something about old Delhi reached out to me and grabbed my heart at the very first sight. I was sold, I was changed.

The rickshaw led us down to wider roads and avenues, eventually stopping at some shopfronts at a roadside. The corridor in front of the shops was partly covered and partly open, and it was covered — I let out an involuntary gasp when I glanced down — with books, for as long as I could see down the corridor, books in small piles and books spread out on the ground, cartons of books and books leaning against the wall. There was a foot or two of space to walk in, between the road and the book-lined corridor, and there was a series of strolling people making their way through this miniature street. My friends and I made our way, from the first shop till as far down as we could go. November sun spread out lazily over everything, and the world seemed like a magical place. I went through book after book, and finally picked out seventeen from various sections of the corridor. I spent less than a thousand rupees that day. With my books stuffed in my bag, half of them hanging from my hand by tightly bound twine rope, we left that place. I felt full, complete, like a city had held out its hand and told me it loved me, it wanted me, that there was space for me and the things I loved in this world.