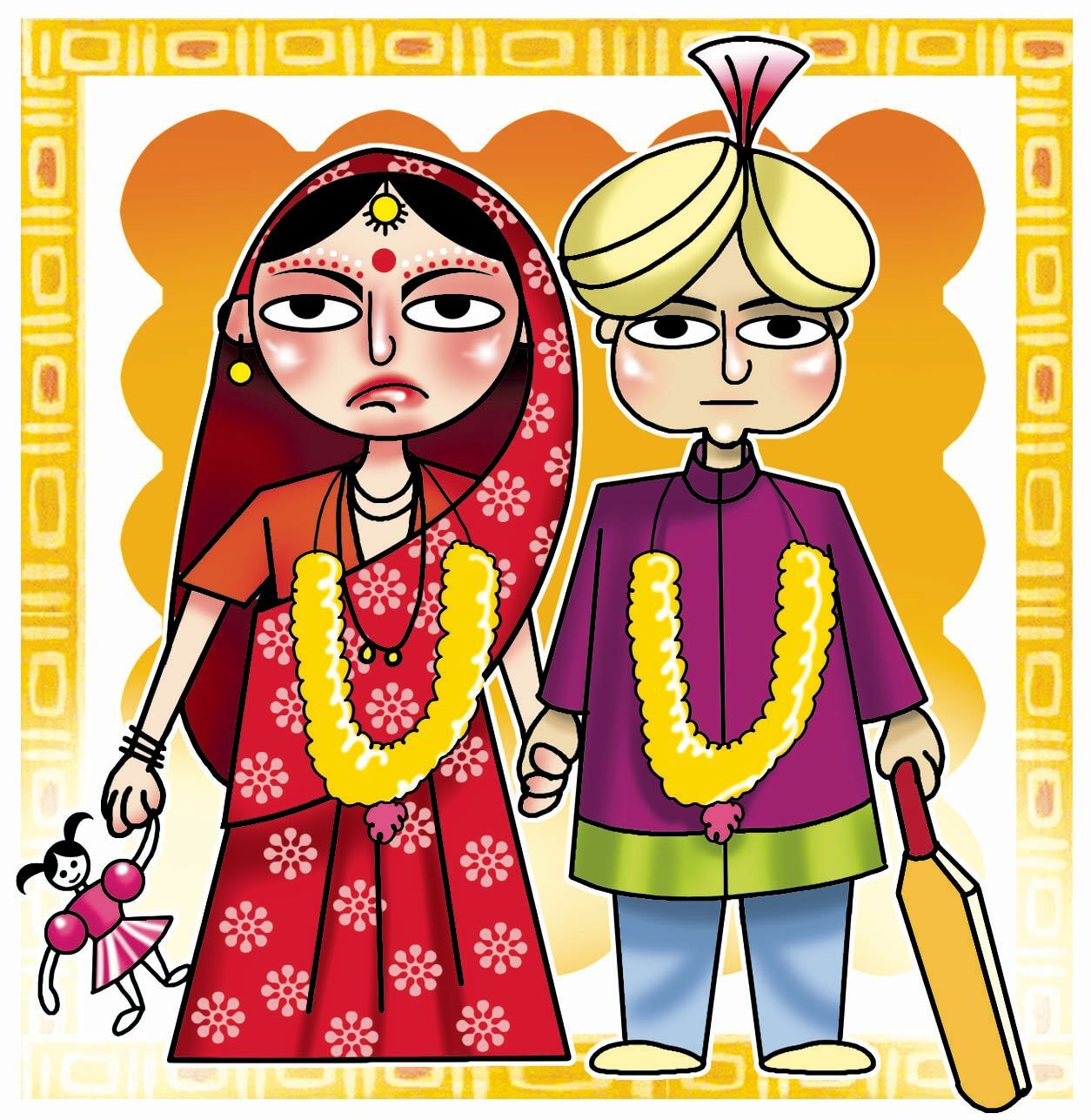 History of the legal age of marriage

In India, marriage as an institution plays a major role in the development of an individual. Marriage is considered to be a sacred ceremony in some religions, and a spiritual contract in other religions. After independence, the Indian Constitution laid down in its preamble the core principle of secularism. As a result, to provide autonomy to all the religions, marriages were governed by the personal laws like the uncodified Islamic Sharia law, The Hindu Marriage Act, 1955, The Christian Marriage Act, 1872 etc and till date they do so, except that the legislature has also been taking steps to curb the societal evils like child marriages, female infanticide, and so on. Needless to say, there is much more effort to be put in,  so that there are equality and well-being in the country.

Last year, BJP spokesperson and lawyer Ashwini Kumar Upadhyay moved the Delhi High Court filing a Public Interest Litigation claiming that the difference in the minimum age of marriage for men and women was based on patriarchal stereotypes and has no scientific backing. According to the erstwhile Sharda Act, 1929, the legal age to get married for a male is 21 and female is 18. The petition seeks to challenge the ongoing discrimination on women regarding the same. The petition further states that it is a social reality that a wife is considered to be playing a subordinate role than her husband and the said age difference deeply aggravates this power imbalance.

In pursuance to that, the Finance Minister Nirmala Sitharaman in her speech for Budget 2020 said they will set up a task force which will dwell into the discussion of the age of marriage vis-à-vis the age of motherhood of women and look from the point of reducing maternal mortality rate which remains high in our country and increase the nutrition levels of women overall.

The Sarda Act, also known as the Child Marriage Restraint Act, 1929, was sponsored by Harbilas Sarda which mandates the legal age of marriage. This Act was introduced by the Imperial Legislative Council of India with the aim to curb the social evil of child marriages. More importantly, young daughters were married to much older males, as females were considered to be a ‘burden’ and no education was granted to them. Initially, the age of marriage was fixed at 14 and 18 years for girls and boys respectively. Later, the act was amended in 1978 to increase it to 18 and 21 for girls and boys respectively.  The provisions of the Sarda Act were enacted in continuation with the law relating to the age of consent under the Indian Penal Code, 1860. At the time of the 1949 Amendment of the Sarda Act, which raised the lowest age of marriages for girls to 15, there was also an amendment to another law, the section 375 exception 2 of the Indian Penal Code, 1860, which increased the age of cohabitation to 15. Since then the provision of Indian Penal Code didn’t change even though the Sarda Act raised the age of marriage to 18 years in later years. After a long battle, only by the Criminal Law Amendment Act, 2019, has the age of consent been at par with the age of marriage. Yet again, now there is a need to raise the age of marriage of girls to 21 to be at par with boys and establish the yearned equality in the society. This brings to notice that not only the Sarda Act should be amended but also the other penal laws regarding the age of consent so that there is no inconsistency left as it was left in section 375 exceptions 2 from 1978 to 2019.

The new task force aims to raise the age of marriage of women to 21 with the aim to reduce the years of motherhood which is believed to have an indirect impact on the population. However, the government fails to understand marriages are still governed by the personal laws which support the marriage of girls at a tender age. The codification of the Hindu and Muslim laws may have granted few reliefs to the minor females, such as in the Dissolution of Muslim Marriages Act, 1939, where there are provisions for seeking a divorce in which a young girl, having been given in marriage by her father or other guardians, can repudiate the marriage before attaining the age of eighteen years, provided that the marriage has not been consummated. However, the practices of marrying girls as soon as they reach puberty still persist.

The different judicial interpretations of what happens after an underage marriage have created a lot of chaos. As of today, underage marriage is not invalid, meaning the marriage still exists in the eyes of law in some states. It is considered to be voidable at the option of the minor that is not ready for the marriage to continue after they reach the age of majority. It means that once the minor reaches majority she can go to the appropriate court and request to nullify the marriage on the grounds as provided under the Act in which the marriage was solemnized. The real question remains, how many of the women have access to legal remedies so that they can divorce their current partners they forcefully were being married off. Since parents play a major role in setting up these marriages there would be no support from them and to make matters worse, the label of a divorced female is still detested in most Indian society. All these factors make a woman vulnerable and thus can socially restrict her.

The government plans to raise the age of marriage but they should also look into the social-economic opportunities which women can avail so that the age-old belief of them being a burden does not stand true anymore. One more reason provided to increase the age of marriage is that women can attain their graduation without being pressurized to get married. However, the legal changes won’t change anything until there is an internalization of these laws as the social norms of the society. As a minor, getting married at a tender age can take away her fundamental right to education and her right to live with dignity.

One of the major reasons marriages are performed is that a couple can reproduce children and provide the children with legitimacy. This leads to the added pressure women face who have already married as early as 18 years i.e. as soon as they achieve the age of majority or sometimes even earlier. Hence, teenage pregnancies of the age 15-19 pose greater health risks and result in premature babies.  With the government raising the age of marriage to 21 for women, it aims to reduce the mortality rates as the motherhood span reduces to three years. It has been constantly observed that as soon as a couple is married they are forced to reproduce a child for the sake of in-laws or with the hope to continue their family name. The age of 15 to 19 years is most vulnerable for women in terms of their reproductive health. The societal pressure of bearing a child as soon as women get married combined with child marriages results in adolescent pregnancies. To delay the age of marriage to 21 will serve an appropriate age for women to bear the child even in the first year of marriage.  In a society, where pre-marital sex is a taboo and sex education is not provided properly in schools, young couples fall prey to peer knowledge and pornography which raise expectations of their sexual experience. The lack of knowledge of contraceptives and its use results in teen pregnancies. The trauma of uncalled pregnancies, miscarriages and stillbirth are high amongst women who marry at a young age.

From the 1970s up to 2016, there had been a spur in sterilization camps due to the government’s family planning policies. After mass deaths of women due to unhygienic environments in 2014, the Supreme Court passed a landmark judgment on the ban of sterilization camps.  Even in the sterilisation procedure, more women participation was seen than men due to social stigma such as vasectomy reducing the strength of men and making them less ‘manly’. Moreover, women’s sterilisation procedure is more complicated and riskier than men’s. The stigma to bear all the pain is a woman’s job should be removed. The responsibility should be equally shared by both the partners while seeking the right medical health.

Marriage is an institution which is formed to re-create bonds and let the evolution of humankind continue. A marriage can be considered as a sacred ceremony as well as a spiritual contract as per personal religious beliefs. However, certain humanitarian values should be upheld. The age of marriage is a crucial issue as it further sends a message of what kind of society we aim to achieve. It is observed that the age of marriage should be equal for both the genders for the power imbalance to extinguish and thus remove the patriarchal stereotypes which still exist. We should aim at a society where marriage is performed between consenting adults who feel ready to take new responsibilities rather than follow a centuries-old made up path. Be it 21 or 45, marriage should be performed freely and build healthy relationships.